If there is one thing I have learned while building the Trashless movement it is this; Everytime when we thought we knew exactly where we were going, reality seemed to be a whole lot different than we could ever have imagined. Learning to deal with setbacks and building faith that better things would come out of it has been the only way to go and there have been many times I wanted to give up, because I did not see how on earth we could reach our goals. I also learned that most of the time, these exact moments were the beginning of a new seed being planted.

After being super excited about us spreading the Trashless game and seeing people all over the world collecting data while playing it, the realisation that gathering data is just gathering data, no matter how many fun elements you add to it, really made me doubt whether it made any sense what we were doing. Then I got a migraine for two days and a headache that lasted another three days (the incredibly loud house music of the party in the Hostel was not very helpful either). Only at the moment I was able to use my brains again, but still had to take it really slow, I started to gain a clearer view on the situation. This is what I thought: "If you already commited to clean the earth, winning from another team can be fun but is not what makes you thrive, because that is just an imaginary gain. Real problems need real victories and we are on the chessboard of planet earth trying to change the future. So how can we do that? What is the best way of putting an end to plastic pollution?"

Making sure we will stop polluting the planet! So what is the best way to do that? To me, ending the mass production of single use plastics, seems the most important thing. And gathering data and politely asking the industry to come with alternatives, while showing them proof of their pollution, seems the best way to approach it (from what I have learned so far) from the perspective of individuals creating change together. After a week, which felt like delivering a baby, our new way to go was not so different, but our game narrowed down to gaining results you can measure.

The next day, we met a young Panamanian woman, who works as a community manager for the Selina Hostel. Her job was to make sure Selina was also giving back to the community with their special "Selina Gives Back programme," and she was very enthusiastic when I told her about our ideas. Uniting people on a global scale to clean up together, while gathering data and writing brands to make them aware of the quantity of their packaging ending up in nature. We agreed to give a presentation about it to tourists and the hostel staff the next day and to the hostel in Bocas del Torro (another Island) the day after.

With one day left and a head that was finally getting stable, we prepared a presentation. The next day there was a full room of people who learned about the plastic pollution and all downloaded the Litterati App to start gathering data. Unfortunately the staff could only join for 30 minutes, but they visibly got the importance of reducing the hostels plastic footprint and even in such a short amount of time, we gathered over 300 items of collected and registered trash! 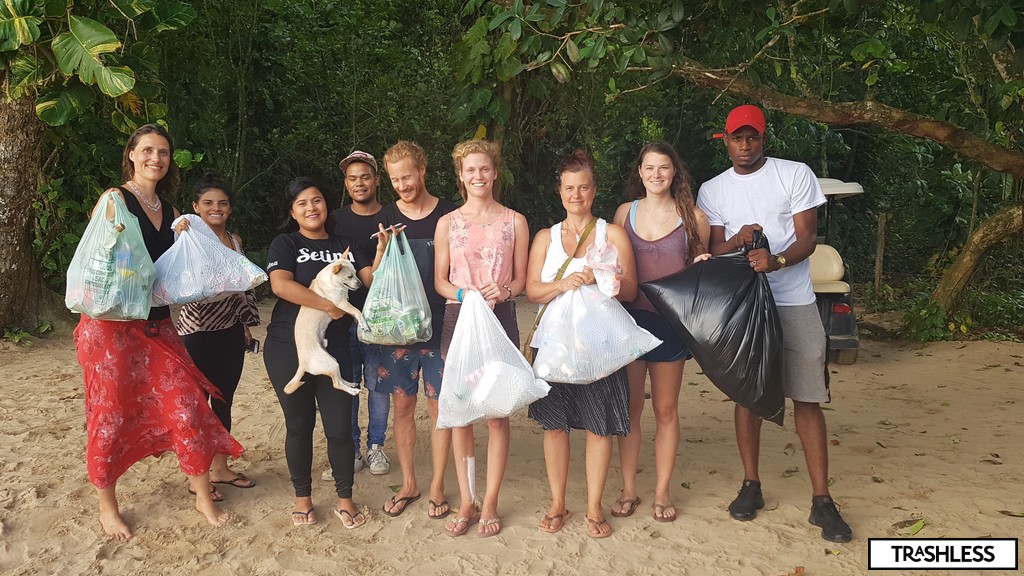 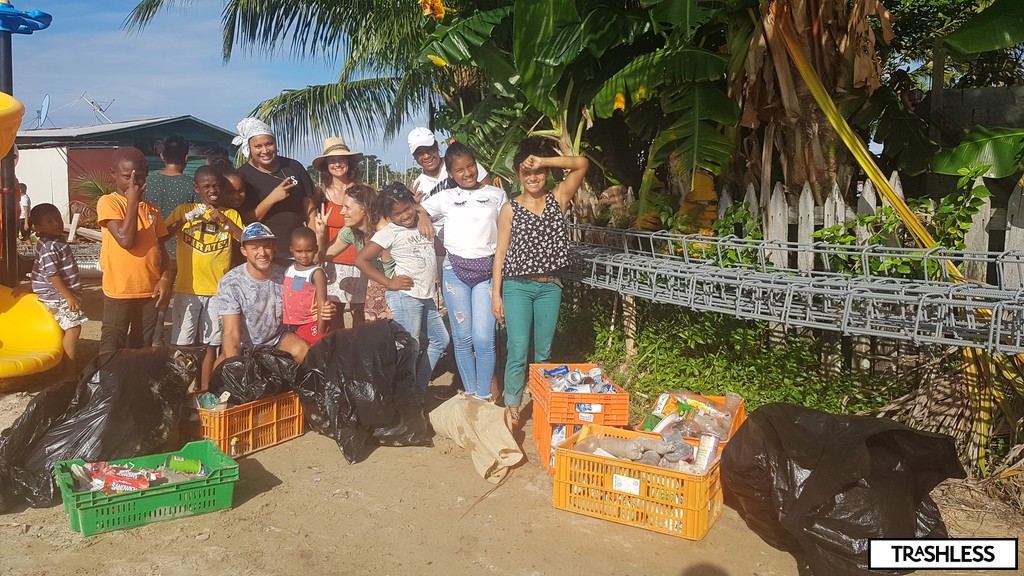 The next day we were fully confident we had a great presentation to show and ended up having a full class of kids. Great! I love kids! But ehm... would they like a technical story about how to use the litterati app? I guess not... since they did not have a cellphone! Ehm... demonstration of our website maybe? Boooring!!! Back home I would probably make a way more gentle and less confronting set of quiz questions, but Carolina said it was fine and interestingly enough the kids went very well with our quiz. Next,we decided to divide the group into teams and have them gather as many items as possible, while an adult would make pictures of the findings and download the Litterati App. The amount of trash they gathered was crazy! I was just sitting in the sand making picture after picture and still the mountain of trash next to me was growing. When the decision was made to go back, it took at least 15 minutes to have the children stop collecting garbage and come with us. Not because they were bad listeners ( I saw them patiently wait for over 20 minutes without anything happening) but because they were so excited in their game of collecting as much trash as possible. Yet we had to stop as the bags and boxes we had filled became too heavy to carry. We even needed two boats instead of one in order to bring everything back to the other island again.

Next to her job as a community manager for the Selina hostel, Carolina is trying to put native tribes back into their strength by organising workshops that help them regain knowledge about being self sufficient, while taking tourists who pay for the workshops to grow their economy. She told us it empowered her to know we were also out there to make a change, but I assume that is nothing compared to the beacon of light she is for her community and especially the natives tribes of Bocas del Torro.