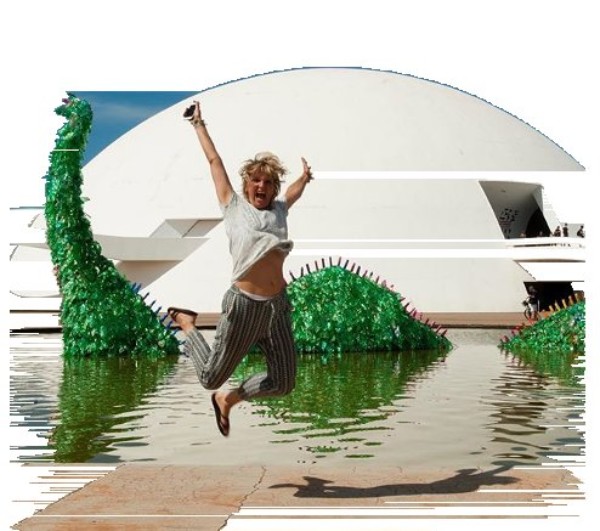 Big problems require big statements
Interview with Maria Koijck by Roan Jagersma
Every person involved with raising awareness for the plastic problem does it in its own way. For Maria Koijck this means using her art as a way to get people involved with, and aware of plastic. As an art academy graduate, Maria started creating plastic related art after an eventful trip to Sierra Leone. Maria: “There was so much plastic on the beaches of Freetown, you had to wade through it instead of through the sea.” After she came back, Maria started collecting bottles on daily bike rides to work. With the bottles she collected she made Petty (to the right).
At first the locals were sceptical and reluctant to have Petty float on the lake outside of their houses. But when the permit for Petty eventually expired, they didn’t want to lose her. This is something Maria has noted more often. “People seem to always be sceptical at first but eventually they’ll be able to see it and then it will often become accepted and part of them.”
A large part of the art Maria has made so far is quite big. When I asked her why she chooses to do so, Maria answers: “A problem this big needs big statements; something that will make people turn, look back and notice. If I were to make a piece consisting of 10 bottles it wouldn’t have the same impact and visibility as something containing 1200 bottles.”
All in all, one would have to agree with what Maria says on her website:” Plastic soep, het zou je laatste avondmaal maar zijn.” (Plastic soup, it would just be your last supper)

Join the movement check out www.trashless.earth

Skip to toolbar
We use a cookie to see if you are logged in or not and when you loggin we use this cookie to remember who you are.
Next to this we use location tracking; we use your location to see where you are and show you the right map.

We don't have any intend to do anything else with this information.
So please accept this or disable cookies and location tracking in your browser.